Music is said to flow through the veins of every halfling created by Bristlebane - some say our creator originally intended for us all to be bards, until he realized that we would not easily put our instruments down, clutching them even into the afterlife (to his chagrin). Rain or shine, all that enter our charming hometown of Rivervale are greeted with cheerful music accompanied by the aroma of fresh baked goods, wafting richly through the air - a sign of our joyful resilience in the face of adversity, when everything else in Norrath seems to be going awry.

In recent memory, the music has only stopped playing on one other occasion, during the Teir'Dal Occupation when dark elves lead by Lanys T'val invaded and occupied Rivervale, right before the Bloody Battle of Kithicor. But even during the Occupation, with blood spilled on the ground and our homes and buildings set ablaze, we halflings of "The Resistance" sang our familiar songs in unison, as a battle hymn of solidarity to strengthen one another as we valiantly fought alongside Firiona Vie to drive out the evil armies of Innoruuk. Since that day, the music has never skipped a beat in Rivervale - not even when local eccentric necromancer Randytrevor briefly arose from his long slumber.

But it was different the last time I returned home - the eerie silence blanketing the town was almost deafening. The normal hustle and bustle of activity was absent, and the fellow halflings that I spied scurried like rats from one hole to another, heads down, without making eye contact. Something was amiss, as even my old friend Bartle Barnick was missing from his usual post just outside the druid hall - but he spotted me from behind the fields where he was hiding, and quickly whisked me inside the Storm Reaper druid guild hall.

"Pihole! We feared the worst when didn't hear from you. You haven't been to the plains of the Karanas, have you?" he asked, as he repeatedly and inexplicably casted spells of warding against disease on me.

"No, I just returned from Faydwer to help the majestic unicorn of Tunare in extreme pain from the corruption of the lands. What happened here? Where is everyone?" I inquired worriedly.

Bartle looked at me incredulously, as if I had just arrived from the moon of Luclin. "Haven't you heard the news? Mayor Gubbin's ordered a lockdown of the entire city, until we find out exactly how fast this plague spreading. The shelves in all the stores have all been emptied of supplies, and Yola Sweetcookie has been out of food for days. This season's entire food crop from the Karanas has already been destroyed, and we've shipped our last batch of unspoiled muffins away to the Deep. Are you hungry? Would you care for an iron ration?", Bartle asked, as he looked at me glumly. I shuddered as I glanced at the non-descript brown bag containing tasteless mystery meat of dubious origin (probably kobold), mass produced by the gnome clockworks deep within the bowels of Ak'anon - and I promptly decided it was better to go hungry, which is not an easy decision for me to admit.

This was disturbing news indeed, especially if the townspeople had already resorted to eating a steady diet of these soulless iron rations. If muffins have indeed disappeared from the face of Norrath, then this plague, a new faceless enemy, had already succeeded where even Innoruuk failed - by snuffing out the hope, joy, and music of Rivervale.

After Bartle finished casting his spells of healing on me, he sat down wearily and explained, "When we heard the plague was coming, bakers across the land began baking muffins at a furious pace, to be sent off to the furthest distant place in all of Norrath, hidden deep beneath of the Ocean of Timorous Deep - where the solitary Muffin-Keeper could stay isolated and safely distribute muffins to every major city in Norrath. The strategic muffin reserve was supposed to help us weather this Karana plague, buying us time until we found a cure - but it's been over a week now, and we haven't heard from the Muffin-Keeper, nor have we received any muffins. Frankly, I fear the worst..."

Hibbs Rootenpaw suddenly ran over, and swiftly thwacked Bartle on the head with his wooden staff, before he could finish his sentence. "As long as I'm the guildmaster of the Storm Reapers, we do not call it Karana plague here in these halls!" he admonished strongly.  "The mighty Karana has nothing to do with this 'Plague of Bertoxxulous", and you know that full well, Bartle Barnick!" Bartle rubbed the back of his head in pain, and nodded apologetically. Hibbs turned and looked at me gravely, "Pihole, if you're feeling well enough, perhaps you help us track down the last of the muffins? The shipment would have left from the docks of Oasis a week ago now. We cannot spare any other druids to help you - so muster up any assistance you can gather, as these are desperate times."

The situation was far worse than I realized as I traveled across the Commonlands, toward the Oasis in the desert of Ro to track down the missing muffins. While the savory pie is the preferred meal for halflings, the simple unassuming muffin has been the workhorse powering Norrath for as long as we all could remember - but now, scores of weakened hungry adventurers could be found laying all over the place, while a makeshift pauper's grave began piling up outside the gates to the city of Freeport. The unseen effects of the plague were even more worrisome - with the inflated price of  iron rations pegged more than ten times the cost of a simple muffin, just buying basic supplies would end up scuttling their adventures before they even began - leading to even fewer goods being bought and sold in the tunnels. I tried not to let these thoughts weigh me down heavier than a Halasian meat pie, as I pleaded with noble adventurers in the tunnels to help me track down the missing muffins - but most had already lost hope that anything could be done. I almost gave up all hope searching as well, when I heard a gruff voice behind me call out, "Muffins you say? Lost at sea? Maybe we could help."

I turned around and found myself facing an menacing ogre warrior of enormous size, accompanied by the scrappiest motley crew I'd ever seen - murderous monks and wretched rogues, haughty high elves and egotistical erudites, devious dark elves and wily wood elves, obnoxious ogres and torporous trolls, ignominious gnomes, the scaliest Iksars, and ungroomed dwarves with unruly neckbeards. Hibbs was right, these were indeed desperate times - and since I was unable to find noble crusaders with good intentions, manners, morals, or even basic hygiene practices, I had no choice but to set sail for the ocean of Timorous Deep, accompanied by none other than than the infamous Shinko Hinko, and the muffinless marauders of the clan "Safe Space".

Feel like you're missing out on 'Vale life? Join the fun!

Ever wonder if you joined the right guild? Here are some things to look out for... 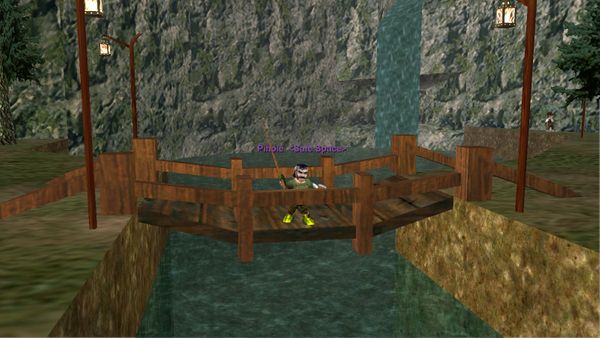 Ever feel like taking a break from your normal grind, to just kick back with a cold brew or two, and soak in the salty sea air? Well you're not alone - fishing is a welcome respite for the weary, a good way to unwind and see some sights in